I needed to start using the leftovers from, oh, about a month ago, so I used up the leftover graham cracker crumbs for the crust in this pie. It was a really rich chocolate-y pie, and I think I would’ve liked just eating the filling by itself, because it was basically just homemade pudding, some might even say it is ganache-like. I have to start finding recipes that use up the other ingredients I have left, but luckily, those don’t really go bad. Also, I have a few cookbooks and recipes saved that I am sure I will find one that works for me.

This recipe is saved from Gourmet and is called Chocolate Cinnamon Cream Pie, but really, the only cinnamon in it is from the crust and the whipped cream that you may or may not dollop on top. So, really, it is just a chocolate pie, with a graham cracker crust. But nonetheless, it was simple and good. 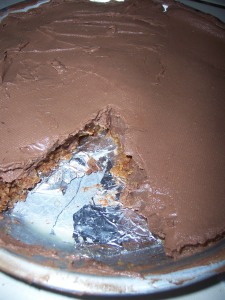 6 ounces bittersweet chocolate (not more than 60%)

make crust: preheat oven to 350º with rack in the middle. stir together all crust ingredients. press over bottom and up the sides of a 9-inch pie dish. bake until set, 12-15 minutes.

make filling: melt chocolate in a large bowl. set aside. stir together cornstarch and 2 tbs. of brown sugar in a small bowl. whisk together the eggs and the yolks and combine with cornstarch and sugar mixture. stir together milk, cream, salt, and remaining sugar in a heavy bottomed, medium pot. bring to just a boil. slowly whisk in half of milk mixture into half of egg mixture. Whisk this mixture back into the remaining milk mixture and bring to a boil, whisking constantly. Off the heat, stir in the butter and vanilla. Strain through a fine-mesh sieve into the melted chocolate. Whisk to combine thoroughly. Pour into cooled pie crust. Cover the surface with parchment or plastic wrap and chill until set, about 3 hours.

In the meantime, you can whip up the whipped cream ingredients in a cold mixing bowl.

Crust can be baked up to two days in advance and the pie can be chilled, loosely covered, for up to one day.

What is this blog about?